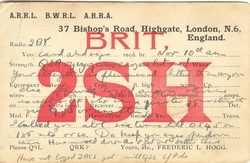 As the types of ham radio licence available have changed over the years, and different call sign series were issued for each one, it may be difficult to identify what the callsigns mean without a table and explanation.

The different ham radio licences reflect the experience of the operators, the Foundation Licence offering entry level privileges while the Full licence offers the highest power levels and the greatest number of bands.

The schemes are different for the M or G series callsigns and those in the 2X* series as the structure of the call signs is slightly different.
Call sign prefix Country
2E England
2D Isle of Man
2I Northern Irelend
2J Jersey
2M Scotland
2U Guernsey
2W Wales
Countries for 2X* series call signs

The call signs in the G and M series follow the same format. The second letter of the prefix indicates the country and purpose of the licence.

Although amateur radio club stations are allocated call signs using the standard series of prefixes, they also have the option to use the other prefixes detailed in the table above to indicate that they are a club station. This can be particularly useful when they are operating in particular as a club station when they want to make their status more obvious, or for example in some ham radio contests where a new prefix has added value.

GB call signs The GB prefix is used for a variety of special ham radio licences ranging from repeaters and beacons to data mailboxes and special even stations. It is possible to tell the use of the station and licence from the format of the callsign.

GB call sign format Purpose
GB3 + 2 letters Repeaters
GB3 + 3 letters Beacons
GB7 + 2 letters Data repeaters
GB7 + 3 letters Data mailboxes GB + other digits not mentioned above
Special event stations For events such as contests it is also possible to obtain call signs consisting of the prefix plus one letter. For example MW0A could be used for a ham radio contest, etc.

Call sign examples Listening on the amateur radio bands, a large variety of UK call signs with different prefixes can be heard. By using the above tables and information it is possible to determine much about the station using them. Although no UK call signs with serial letters in the series QAA to QZZ were issued, these can be used as examples as they do not belong to real stations. For example it can be seen that a station with the call sign G3QQQ would have been issued with a class A license and now hold a UK full licence, but it would have been issued between 1946 and 1971, well before the current licensing system was introduced. An amateur radio station with the call sign GB3QQ would be a repeater, and so forth.