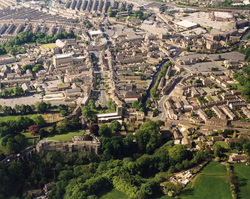 Skipton is a market town serving a large rural area. It is situated in the county of North Yorkshire just outside the Yorkshire Dales National Park boundary, Skipton it is known as  'The Gateway to the Dales'. Its name comes from the Saxon word for sheep - 'sheep town'.
Settled by sheep farmers as long ago as the 7th century, Skipton was granted to the de Romille family in 1066. Their building of a fortress castle led to a regular market being established for local produce and trade, which continues to the present day, whilst seasonal Fairs brought traders into town from further afield. The market was granted its charter by King John in 1204.
From the castle and nearby Holy Trinity Church the town grew around the market place, expanding along what is now High Street, with coaching inns, yards, and craftsmens' workshops.
In 1309 Skipton Castle passed to the Clifford family, and became their main residence for over 300 years. The castle was rebuilt after the Civil War, and much of the present castle dates from the 1650s. It is open to the public, and is well-preserved.
With a long established livestock market, Skipton became an important wool trading centre as roads developed.
The arrival of the Leeds-Liverpool canal in 1770 brought industrial growth to Skipton, with cloth making becoming a major activity. The railway brought increased growth to the town.
Nowadays, Skipton is a major commercial and shopping centre, with its colourful market being held 4 days a week and a variety of interesting pubs and eating places. 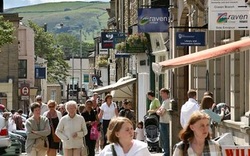 On Saturday, 13 July 1901, a gala was held in Skipton to raise money for the Skipton and District Cottage Hospital, built at the time of Queen Victoria's Jubilee, held on the Brick Buildings Fields off Bailey Road. This was such a major event in the area that extra trains were laid on to bring revellers to the town from miles around. After the formation of the NHS, with the hospital being funded from central government, the gala continued, raising money for local charities and non-profit-making organisations. Nowadays, this charity gala, held every year on the second Saturday in June, starts with a procession through the town centre to Aireville Park, where various live performance acts entertain the public, culminating in live music and a firework display.
The Town Hall in Skipton holds regular craft fairs and special events and also houses a local history museum.
Skipton Little Theatre is located near the town centre. The Mart Theatre is an unusual and unique venue.Opening in October 2005  it provides a unique rural theatre, events and other facilities within a functioning Auction Mart.
Skipton is twinned with the Bavarian town of Simbach.
Skipton has many pubs, two nightclubs, and restaurants ranging from traditional fish and chips to high quality French cuisine, taking in modern British, Mexican, Indian, Greek, Chinese and Italian.
The local newspaper is the Craven Herald & Pioneer. 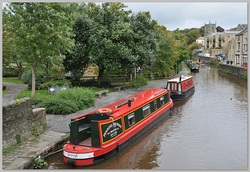 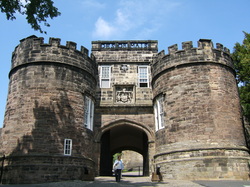 The castle has stood for over 900 years, first built as a Motte and Bailey castle in 1090 by Robert de Romille, a Norman baron. The castle was soon replaced with a stone keep as the old Motte and Bailey constructed was not enough to withstand the attacks from the Scots to the north.
In 1310, Edward II granted the property of the castle to Robert Clifford who was appointed Lord Clifford of Skipton and Guardian of Craven. Robert Clifford ordered many improvements to the fortifications of the castle but died in the Battle of Bannockburn in 1314 when the improvements were barely complete.
During the English Civil War it was the only remaining Royalist stronghold in the north of England until December 1645. After a 3 year siege, a surrender was negotiated in 1645 between Oliver Cromwell and the Royalists. Oliver Cromwell ordered the removal of the castle roofs.
Skipton remained the Cliffords' principal seat until 1676. Lady Anne Clifford (1590-1676) was the last Clifford to own Skipton castle. After the 3 year siege, she ordered repairs and as a commemoration she planted a yew tree in the central courtyard to mark the Castle's repair from the English Civil War.
Today it stands as one of the most preserved medieval castles in England and is both a tourist attraction and a private residence.